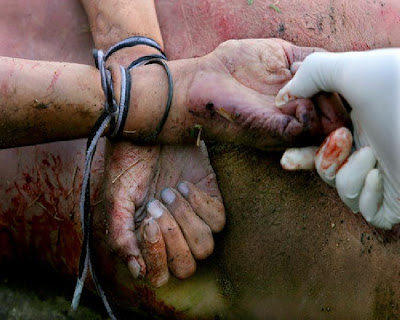 Rehman Malik: the Civilian Face of Pakistan’s Military Establishment
Pakistan’s Interior Minister Rehman Malik, the civilian face of the country’s powerful military establishment is a continuation of the former dictator General Pervez Musharraf’s policies in Balochistan. He is the one who sanctioned and devised the policies of empowering Frontier Corp (FC), the Pakistani paramilitary, in Balochistan involved in enforced disappearances and the ‘kill and dump’ activities.
The two recent dead bodies found yesterday, February 23, 2011 were identified as Mehboob Wadela of Baloch National Movement (BNM), disappeared from Karachi in April last year. The other body was identified as Rehman Arif’s, who was a member of the Baloch Republican Party (BRP) and was abducted four months ago from Gwadar bringing the total to 103 bullet-riddled bodies of missing persons over the past seven months.
On February 23, 2011 Amnesty International urged the Pakistan government to immediately account for the “alarming number of killings and abductions in Balochistan attributed to government forces in recent months. http://www.amnesty.org/en/for-media/press-releases/pakistan-balochistan-atrocities-continue-rise-2011-02-23

On February 25, 2011 the Hong Kong based Asian Human rights commission condemn the disappearances in Balochistan and called it a routine work of the Frontier Corps (FC) and state intelligence agencies. AHRC further added that since last year the law enforcement authorities have introduced a new trend in which they kill the disappeared person extra judicially so as to destroy any possible evidence of their involvement. http://www.ahrchk.net/ua/mainfile.php/2011/3676/

These two bodies show the blood lust of the Pakistani establishment. The body of Rehman Arif portrays the brutality of the Pakistan Army in which the eyes were poked out; tongue was cut off, arms and legs wrapped around each other in the agony of death. Both were shot at a point-blank range in the head, the bullet tearing away a line of flesh up from the forehead entering the brain. Both bodies have vivid crimson or black scars down the left side of their throats. This kind of brutal and horrific method of killings were not even witnessed in the medieval time, what Pakistani establishment has been applying against the Baloch innocent masses struggling for their legitimate rights.
Pakistan’s Interior Minister Rehman Malik had already threatened the Baloch populace that until and otherwise Baloch will salute the flag of Pakistan this operation will not stop. This is the exact clone polices of former Dictator Musharraf‘s towards Balochistan. This so-called democracy even went one step ahead to save the strategic interest of Pakistani Army in Balochistan by introducing the bullet-riddled dead bodies. And not even a week passes by when Baloch mothers, sisters, and children are not being gifted with a mutilated dead body of their loved ones which are leaving life-long scars, both physical and psychological on the Baloch nation.
Over 10,000 people have been made disappeared and over 1100 cases are registered with the United Nations Working Group on Enforced or Involuntary Disappearances (WGEID) by the London based International Voice for the Baloch Missing Person (IVBMP).
These decomposed bullet-riddled bodies are only 1% of the total disappeared made by this "caravan of death", headed by the Pakistan Army. The grieving families are desperate to know about their loved ones. It is not hard to believe that Pakistani Security Establishment (ISI) had mutilated those bodies so horrendously that the only solution was to "disappear" the corpses and bury them into the history.
The slaughter of the Baloch had started the day Pakistan occupied Balochistan in a military coup in the year 1948. The Baloch have seen more than six decades of suffering at the hands of this apartheid government.
Once, a friend of mine told me that “Every time a Baloch is murdered, a bit of Pakistan dies”. The number of bullet-riddled bodies, which we are receiving, has turned Balochistan into a graveyard and has left no room for Pakistan to stay in Balochistan. And every Baloch heart is crying freedom from Pakistan’s brutal occupation.
The Pakistan civil society and the ISI-backed spin media outlets shamelessly refuse to cover Balochistan, specially the issue of the missing persons, and try to divert the whole issue by the claims of the killing of non Baloch in Balochistan. The logic of civil society in Pakistan and of those who demand that Baloch should stop the resistance is absurd. The civil society absolves the aggressor and occupier - armed with the deadliest weapons of death and destruction of the responsibility, while blaming the victim, prisoner and occupied. And instead of being sympathetic with relatives of those mutilated dead bodies, a concerted effort is waged to trivialize this tragedy by calling it a plot of foreign forces to disrepute Pakistan. This is like rubbing salt to the Baloch wounds.
For the last 63 years Baloch in Pakistan have been under siege, incarcerated, and sealed off from the rest of the world, air and sea, slowly genocide, bombarded homes, schools, no one is spared from Pakistan’s brutal death policies. This river of blood is being shed under lies and false pretexts. The collective punishment did not halt, but accelerated – as they brought the enforced disappearances and bullet riddle bodies.
I don’t know why I remember the Australian independent MP Mr. Bob Katter. He said that Pakistan is long overdue for NATO intervention, and said that this intervention is inevitable and imminent. Mr. Bob Katter demanded that Australia should support NATO’s intervention into Pakistan.
On the World Summit 2005 almost all countries adopted the Responsibility to Protect (R2P) doctrine. This doctrine puts the protection of human lives against human rights violations in the centre and envisages three steps 1.Responsibility to Prevent 2.Responsibility to react 3.Responsibility to rebuild
Pakistan has failed to contain the slow motion genocide of Baloch populace and hence the second step, the reaction to “large-scale loss of human lives”, is decisive. To prevent this slow motion genocide which is heading towards a large scale genocide we urge the International community to intervene in Balochistan and give Baloch masses the right to chose their own destiny.
Imtiaz Baloch
Spokes Person
Baloch Human Rights Council (Canada)
The writer can be reached at Imtiaz2000@hotmail.com, BHRCCanada@gmail.com
Posted by BALOCH HUMAN RIGHTS COUNCIL CANADA at 11:43 AM

fuck you for barking out shit out of your mouth... y dont u open ur eyes and realize the fact that INDIA is not ur friend.. wake up...

Long live Baluchistan and its freedom, Pakistan Establishment is Criminal of hundreds of Baluch lives