Liberated woman of Balochistan is the mother of a free nation. 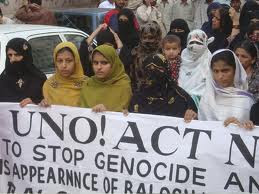 Liberated woman of Balochistan is the mother of a free nation.

Today marks the 100th anniversary of International Women's Day.
It is a day for the women in the world enjoy liberation but today more than 10,000 Baloch mothers and sisters are screaming loudly of horrible nightmares of their loved ones which were made disappeared by the Pakistani army in the occupied Balochistan. There are over 1100 cases registered with the United Nations Working Group on Enforced or Involuntary Disappearances (WGEID) by the London based International Voice for the Baloch Missing Person (IVBMP). As per Balochistan based Voice for Missing Baloch Persons (VMBP) for the last seven months Baloch mothers have embraced over 105 decomposed bodies for their loved ones which were abducted, tortured and killed by Frontier Corp (FC) in the occupied Balochistan.
Today the Baloch mothers are being punished for raising the slogan of a secular and democratic Balochsitan.
Unlike Canada, the US and other western countries, photos of abducted children do not appear on the back of a return envelop or on a bus, in occupied Balochistan the mothers know where they are, in the torture cells of Pakistani Army. Today Balochistan is in turmoil due to kill and dump policy of Pak Army.
Indigenous Baloch populace are being militarized and marginalization for the last 63 years by Pakistan Army. Today the hostile military operation of Pakistan Army combined with the terrorist actions of kill and dump policy of mutilated dead bodies have prompted an exodus of over 80 percent of the native Baloch population from Kohlu and Dera Bughti. The social, economic and political effects of the ongoing military operation on the civil society are devastating, especially for women and children. One such case in point is the mass exodus of 84,000 internally displaced people from the war torn areas of Kohlu and Dera Bugti. According to UNESCO, among the thousands of displaced families, 26,000 women and 33,000 children are forced to live in refugee camps under sub-human conditions without proper shelter, food and medicine. So far 76 fatalities, mostly children, have been reported in these camps, scattered in the districts of Quetta, Nasirabad and Jaffarabad. Islamabad is in complete denial of the realities and has blocked all aid to these suffering people of Balochistan by international aid agencies.
Today the world is oblivious to the peace making role of Baloch women in the Baloch history. Banari, the sister of Chakar Khan, chief of Baloch tribes, led the Baloch tribal army in war against Delhi in late 15th century and won the throne for Moghul emperor Humayun.
The secular nature of the primitive tribal structure was the source of gender equality in Balochistan for centuries before the arrival of the ‘puritan brand of Islam’ (Deobandi) and the British colonial rule. The religious orthodoxy preached gender discrimination, while the British changed the primitive tribal set-up of collective land ownership into a feudal control of the land owned by the chieftain. This religio-economic mix later on was inherited by Pakistan as state policy of control and exploitation based on ethnic, religious and gender bias.

Pakistan’s collaboration with the fanatic Islamist is not hidden to any rational mind. This military-mullah alliance had brought constitutional changes against religious minorities and women. This alliance had fueled a culture which is hallmark of terrorism and violence against women and other minorities in Pakistan, which did not only destroyed the very basis of human creativity but growth and democracy. Dr. Shazia Khalid(raped by Pakistani Army official in Balochistan) Zarina Marri(disappeared in Balochistan), Salman Taseer(Governor Punjab, killed by a Jiahdi police) and Shebaz Bhatti(a Christian Minister killed by a Jihadi). They have all became victim to the forces of darkness cultivated by the decades old policies of this Military-Mullah alliance.
Despite the hardships, women of Balochistan are fighting back the decadent system maintained by the state as a borrowed tool of oppression from their colonial masters. Never before in the modern history of Balochistan, there has been such an upsurge of political activism among women across Balochistan – from Karachi to the coast of Bandar Abbas - struggle against military and mullah atrocities is transcending the gender barrier.
Probably the Baloch women have found their inner Banari, leading the way to battles against the enemies of equality and freedom. Today the morally bankrupt state of Pakistan and Iran with their twin evils of theocracy and military autocracy are responsible for all the crimes committed against women. If a woman was more independent in the medieval Baloch society then what good is this so-called modern state of Pakistan and Iran?
The history have given the Baloch Women the inescapable choice- a choice about the future –and the future belongs to freedom – freedom from the state that has generated ideological, political and social basis for gender bias, discrimination and crime against women. Today, womens’ liberation in Balochistan is connected with the broader question of national emancipation of the people from the yolk of religious conservatism and military adventurism.
Liberated woman of Balochistan is the mother of a free nation
Imtiaz Baloch
Information Secretary
Baloch Human Rights Council (Canada)
Member International Voice for the Baloch Missing Person (IVBMP)
(Balochistan is a Texas size state occupied by Pakistan in the year 1948. This is the fifth Baloch uprising against the Pakistani brutal military regime)
Posted by BALOCH HUMAN RIGHTS COUNCIL CANADA at 11:09 AM

My cousin recommended this blog and she was totally right keep up the fantastic work!