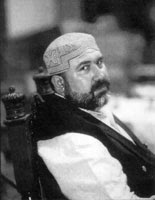 According to a Pakistani News paper the Karachi-based US Consul General Stephen G Fakan has met some family members of Khan of Kalat Mir Suleman Daud in Kalat Town.

This was the first meeting of any US diplomat with the family members of Khan of Kalat who was in self-exile in London for the last four years.

According to sources, the prevailing situation of Balochistan also came under discussion during the meeting. It may be mentioned that Khan of Kalat had not only convened an important jirga of Baloch tribal elders after the assassination of Nawab Akbar Khan Bugti but he had also left the country.

Some sources claimed that attempts were made on behalf of some important personalities to bring Khan of Kalat back to Pakistan but so far these efforts have not succeeded.
Khan of Kalat had also rejected any negotiations with the govt without presence or assurance of international guarantors.

Political observers were attaching great importance to the meeting of a senior US diplomat with the family members of Khan of Kalat. However, it could not be known whether this was a courtesy call or any attempt on behalf of some foreign diplomats for improvement of situation in Balochistan because US and its allies were considering peace in Pakistan indispensable for their success in war against Taliban in Afghanistan.

http://www.nation.com.pk/pakistan-news-newspaper-daily-english-online/Islamabad/02-May-2010/US-diplomat-meets-Khan-of-Kalat-family
Posted by BALOCH HUMAN RIGHTS COUNCIL CANADA at 11:03 AM

US intervention in the affairs of Balochistan is not a good omen at all. The history of US business around the world proves that they're are an extremely selfish party to deal with and have never brought anything good for a nation's cause. I believe that the Americans are playing a dirty game in the region by giving arms and intelligence to the Pakistani army while encouraging the Balochs to attack Chinese investments in the region. Baloch cause for autonomy and independence will suffer a lot if Americans get deeply involved.

There is no selfish governments than those in USA. Also for the Baloch neither the Jirga was significant nor is the Khan true representative of Baloch people. The Jirga was called by propakistan sardars who did a favour to Musharraf and in return got the seats of governorship and CM.

BHRC must not be in any illusion about this meeting.

BHRC is a human right organization struggling to raise the profile of Baloch in Pakistan and Iran and at the same time to match the struggle of Baloch who are defending their motherland in the occupied Balochistan. We have just posted this news for the public opinion and raise a comprehensive discussion.
Thank you The Baloch, I hope I have answered your question.
BHRC Canada

Why meeting with family? why not his self?

The jirga was an act to cool down the anger on Nawab Akbar Khan's killing using chemical weapon, the key player of that so called jirga are in Government and they are involve in the killing of Baloch leadership like G.M Baloch.

It may US wana send a message to many people, including the Baloch remember it is a blank message

or it may US wana negotiate on the security of NATO roots that are being hit by pro-government Sardars! (deal for money)

i wonder how this news came from Paki media?? this is more important question to understand and calculate the things.