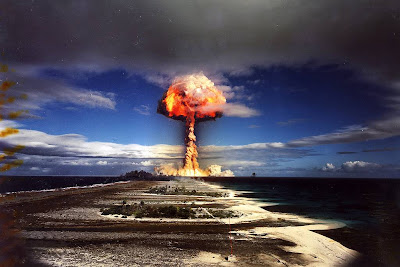 By Imtiaz Baloch
Pakistan is the country that gives national security experts around the world nightmares. Pakistan is a country with an unstable and irrational history- Pakistan is a country that harbors Al-Qaida and its radical Islamic cells- Pakistan is a country with a notorious intelligence service which pampers Taliban- Pakistan is a country whose army's very anthem is to become the mercenary of the Islamic world right from the River Neil to Kashagar(Uyghur) China. It’s a country whose notorious nuclear missiles are named after the Islamic invaders who came from Central Asia to invade India. And if you want to put some more spice into this, it's a country with a nuclear arsenal. The security of this nuclear arsenal is one nightmare, the using of these nuclear on the nonbelievers and non Muslims is another suffocation and walmartizing and retailing of these nuclear arsenals to the rogue counties like Iran, North Korea and Libya is an imminent material danger to the world peace.
Abdul Qadir Khan, the father of the Pakistani Islamic nuclear bomb and a close friend to Ahmadi Nejhad and the notorious ISI, while running Pakistan’s nuclear programme, became a millionaire by selling atomic secrets to Libya, Iran and North Korea. He also used a network of companies in America and Britain to obtain components for a nuclear programme. As per Time magazine, in the early 2000, Qadir Khan caused an alert among western intelligence agencies when his aides met Osama Bin Laden. Sources confirmed that Saudi Arabia, that provides ideological premises to the radical Islam, has financed this Nuclear bomb and is the only country that is allowed to make frequent visit to Pakistan hidden nuclear sites.
Beside all of the above Islamic adventures of Pakistan Army, these atomic blasts had left permanent scars on Baloch history. It was Twelve years ago on May 28, 1998 when peace in the Pakistani occupied Balochistan was brutally shattered with a nuclear blast. The Islamic fundamentalists and their uniformed brethren, the Pakistani army, rejoiced the testing of the first Islamic bomb. The foreign minister of the Islamic Republic of Iran sent his greetings to the Pakistani government of the time while the world leaders were shocked and pleaded for sanctions against Pakistan.

This event was followed by further tests in the Chagai district of Balochistan devastating all life form including the livelihood of the nomadic Baloch tribesmen who were forced by the army to leave their ancestral lands to roam the deserts with their herds and tents. The physical and psychological effects on the people of Chagi Balochistan where these atomic test occurred are limitless, both in scope and time. After the nuclear blast, at miles, several people were burnt; people bled, people blinded, their burnt dead bodies were confiscated by the local Army Chief and declared that they died in heat, but very next day people found several burnt dead bodies of camel, as if camel dies in heat too.

In the last twelve years, Balochistan has become Pakistan’s frontline testing ground for advance nuclear warhead carrying missile technology borrowed from China and North Korea. The WMDs being developed in Pakistan today are part of the Chinese hegemonic design of expansionism in the region to control the energy centers, which include the Deep Sea Port Development of Gwadar in Balochistan, the gateway to oil and gas reserves in Central Asia and the Middle East. The local inhabitants of Balochistan are being forcefully displaced and slaughtered through a brutal military operation so that their resources and land stays in the hands of the Pakistan Army for exploitation and military adventures.

Islamic Republic of Iran's threat to world peace is far more than a mere rhetoric. Islamic Republic of Iran’s continuous effort to possess the capability to enrich uranium to the level needed for military purposes and Pakistani Army’s secret help in passing the Nuclear Technology is an imminent fact. This time it will be Islamic Republic to test its nuclear capability, and the venue will be Iranian Occupied Balochistan. The world will just accept this Nuclear Iran as a brutal reality as they did with Pakistan.
Today the temperatures had plunged by about 2 degrees Fahrenheit (1.25 degrees Celsius) over a large area in Chagi District, the faces of inhabitants have turned pale, women giving birth to blind children, people are dying of unknown diseases, the whole area had been contaminated. No independent study has been conducted to calculate the disastrous consequences of this catastrophe caused by this Islamic Bomb. This is the day when rest of Pakistan is on street rejoicing the Atomic Bomb but eyes of Baloch is full of tears and Baloch mourns today.
Posted by BALOCH HUMAN RIGHTS COUNCIL CANADA at 3:30 PM

YOU ARE A FUCKING TRAITOR AND LIAR.. YOU ARE AMONGST THOSE DOGS WHO SURVIVES ON THE LOAFS OF ENEMY AND START SWINGING YOUR TAIL. STOP LYING JUST FOR THE SAKE OF A FEW COINS. PLEASE STOP SELLING YOUR MOTHER FOR GREEN PAGES (DOLLARS).