Baloch child may be without socks, but when he grows up every step he takes will be on gold 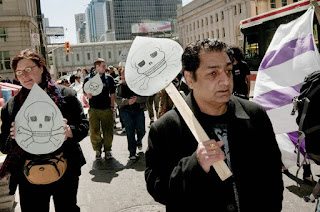 Baloch Human Rights Council of Canada is grateful for this opportunity to speak on behalf of the people of Balochistan and to express our solidarity with the oppressed people and nations of the world in their struggle for justice and freedom.

There is a saying in Balochistan that a Baloch child may be without socks, but when he grows up every step he takes will be on gold.

Balochistan, the southwestern province of Pakistan, is rich in mineral deposits and is the energy hub that supplies 30% of the country’s need for natural gas. It is also 44% of the total landmass of Pakistan. And yet the Baloch nation for the last six decades, since their forceful occupation by the Pakistani military in 1948, is systematically being marginalized from society and from their ancestral lands. At present, as we speak, there is a brutal military operation being conducted by the Pakistani army to crush the indigenous movement for sovereignty over their lands and natural resources.

More than 8000 Baloch political activists including 141 women and 168 children have been forcefully disappeared by the Pakistani military secret services. Hundreds of youth have been tortured to death and their bodies dumped in the wilderness dropped from military helicopters. This is a land where secret military death squads are involved in targeted killing of Baloch political leaders including the former Governor and Chief Minister of Balochistan, Nawab Akbar Khan Bugti, also the chief of the Bugti tribe who was assassinated on August 26, 2006. Balochistan is a land where gross human rights violations and slow motion genocide is an everyday reality.

Such are the circumstances of political turmoil and civil strife in Balochistan today where Barrick Gold is investing in gold. Let me tell you, the gold from Balochistan is not yellow anymore; it is the colour of the blood of our martyrs and national heroes. This is simply unethical, illegal, and against international law to invest in business ventures in a zone of conflict.

Reko Dik is an ancient volcano in the Chaghi district of Balochistan, which literally means sandy peak or sand dune in the Balochi tongue. This is the place where we have world’s fifth largest copper and gold deposit and where Barrick Gold is involved in digging and polluting the earth for riches that do not benefit the local inhabitants.

Ironically, the district of Chaghi in Balochistan is also the site to Pakistan’s 1998 nuclear test that ended all livelihoods for the inhabitants and their livestock. Local tribesmen and their families were hauled in military trucks on short notice and displaced into the remote desert without any compensation. Pollution and illnesses from the radiation have never been investigated because it has been declared as a sensitive military zone.

Barrick Gold is not only guilty of investing in a zone of conflict; they have also officially appointed military personnel of the Pakistani army, Colonel Sher Khan as the security director of the company’s site in the area. This man has personally commanded military operations in Balochistan and has openly threatened in media and news blogs that resistance to the state control of Balochistan’s resources shall be crushed at all cost.

The other shadowy person involved in the Barrick Gold racket is a Pakistani businessman living in the U.S., Mr. Muslim Lakhani who made millions by arranging and facilitating deals at the highest level for the Canadian company that includes not only the top brass in the army but the President of Pakistan, Mr. Asif Zardari. Muslim Lakhani contributed generously to the Obama campaign in the recent U.S. elections. He is also on the Council of the prestigious Woodrow Wilson International Centre for Scholars in Washington D.C., where he is mentioned on the Center’s website as the man who was able to bring to the market a discovery of one of the world’s largest reserves of copper in remote Balochistan. Mr. Lakhani is also a very close buddy of Pakistan’s former military dictator, retired General Pervez Musharaf who has been nicknamed by the Baloch people as the butcher of Balochistan.

Well, so much for the track record of violations of human rights and international law by Barrick Gold and its partners in Pakistan and elsewhere in the world. In a recent unanimous decision by the Chief Minister of Balochistan, Nawab Aslam Raisani and his cabinet ministers on December 24, 2009 cancelled the agreement with Barrick Gold for exploration of gold and copper in Reko Dik despite the pressure from Islamabad and warnings from the U.S. Ambassador and the Canadian Government. Chief Minister Balochistan stated that this is according to the wishes of the people of Balochistan and that any agreement, which undermined the rights of the indigenous people, would be cancelled.

Reko Dik, the sandy peak is indeed a symbol of our national pride and resilience of a people who know the price of freedom. Below this sandy peak lie 12.3 million tons of copper and 20.9 million ounces of gold and along the dusty paths of this remote land you will always witness a shepherd boy walking without socks on his feet.

In the end, the message for Barrick Gold from Balochistan is that each ounce of gold that you steal from us is drenched in blood and tears of our people.

Posted by BALOCH HUMAN RIGHTS COUNCIL CANADA at 11:54 AM